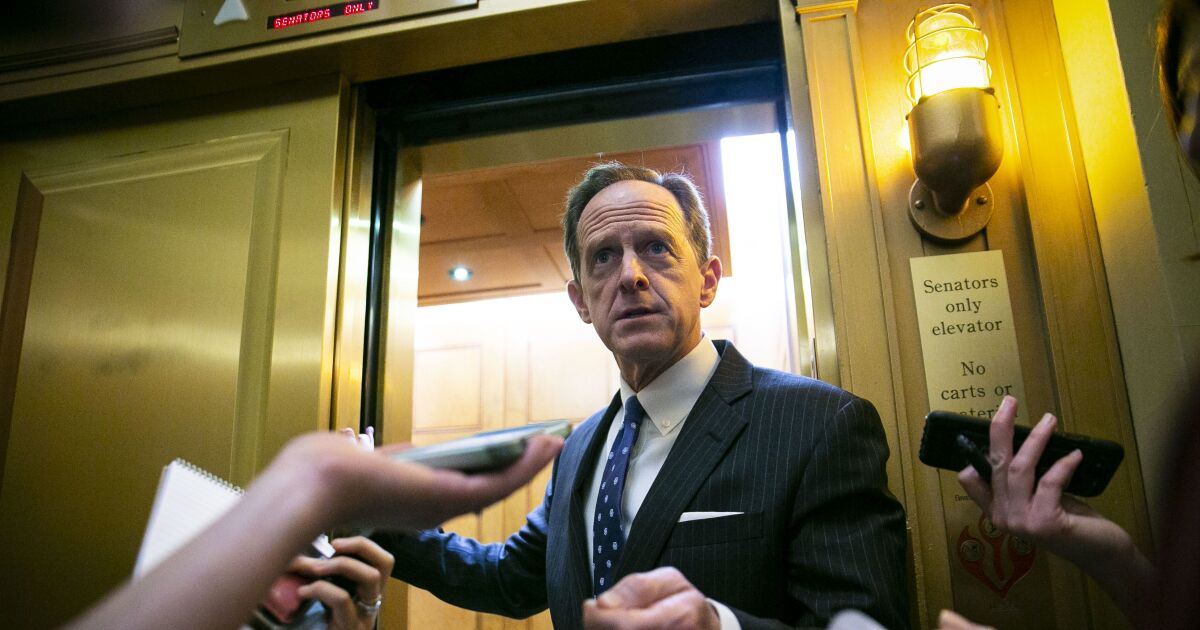 Senators Ron Wyden and Pat Toomey are drafting a proposal to overhaul a cryptocurrency provision in the $550 billion bipartisan infrastructure bill that traders and investors have criticized as being overly broad and impractical.

The bipartisan duo’s more-targeted language would replace what’s in the bill the Senate is now debating — should their amendment get 60 votes on the Senate floor. It could also cause new problems for the legislation, which was the product of several weeks of intense negotiations between the White House and senators.

The Joint Committee on Taxation estimates the crypto reporting rules now in the bill would generate $28 billion in revenue, paying for roughly 5% of the bill’s total costs. The Toomey-Wyden language may not generate as much revenue, a potential concern for senators who have demanded the bill be fully paid for.

Wyden, an Oregon Democrat, chairs the Senate Finance Committee and Toomey, a Pennsylvania Republican, is a senior member of the panel. The two each have a history of working on tax and technology issues.

“There is a sense that there are some opportunities that really provide a window for addressing what this technology is all about,” Wyden told reporters on Tuesday. “The text of the bill originally didn’t do that and there’s a group of us working together to get it fixed.”

Both senators have criticized the crypto language in the bill for failing to account for how the technology is used.

The current bill would require cryptocurrency exchanges to report more data to the Internal Revenue Service. The industry has said that the current language is too broad and would require some crypto participants, such as miners and software developers, to report data they don’t have access to.

“We’ve been trying to make sure the definitions reflect what really goes on in the digital asset world, and we didn’t think the previous amendment did that, and so this effort is to make sure that we’re really focused on the people who have the information,” Senator Cynthia Lummis, a Wyoming Republican who focuses on crypto issues, said.

Regulating virtual currencies has become an area of bipartisan concern as the value has exploded in recent years. Its use has also been tied to tax evasion, money laundering and other illicit activities.

Wyden said he is talking with Republicans who want to be involved, including Ohio Senator Rob Portman, who wrote the current language in the bill. Toomey said the talks are “constructive.”

Republican Senator Marsha Blackburn of Tennessee said she, too, is concerned about the cryptocurrency provision in the legislation. She said Congress and federal regulators need to tread carefully so as not to create “undue due diligence” on individuals or other entities involved in transactions.

“This is an area where we need to view what type of light touch or appropriate regulation should be,” Blackburn said on Bloomberg TV’s “Balance of Power with David Westin.”

Toomey said he did not know when the amendment would be ready for a vote. Senate Majority Leader Chuck Schumer has said he hopes to pass the final infrastructure bill this week.

— With assistance from Steven T. Dennis

COVID-19 having long-term impact on internal audit
IRS hit with programming bug on COVID-19 tax relief
About 1 million more kids could get the child tax credit in the future thanks to this change in plan from Democrats
IRS: COVID tests are eligible medical expenses
ADP improves RUN payroll system, adds vaccine tracking