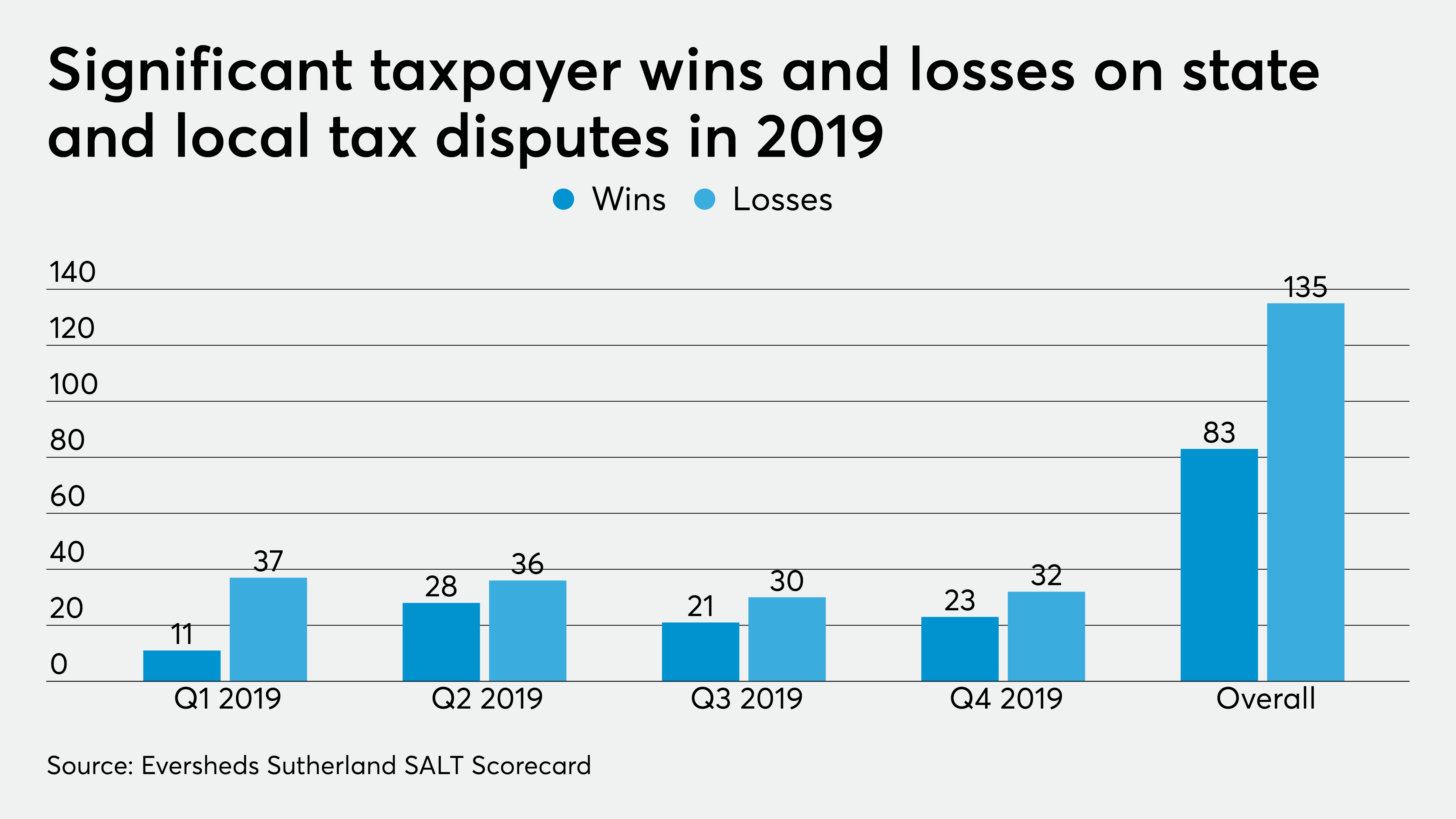 The global law firm Eversheds Sutherland’s State & Local Tax practice released this month the fourth edition of its SALT Scoreboard for 2019, where it tallied the results of what it considered to be significant taxpayer wins and losses, with an analysis of those results.

Microsoft also won in a Wisconsin case in which the Wisconsin Court of Appeals rejected the Wisconsin Department of Revenue’s attempt to include in the software giant’s franchise tax sales factor numerator the gross receipts from the use of its computer software by Wisconsin end-users. The court held that the taxpayer was not required to “look through” its computer manufacturer customer to source a sale to the location of the customer’s customer. Instead, the court determined that the royalty receipts at issue must be sourced to Wisconsin only if the income-producing activity was performed in the state. View more information.

More often, though, the state tax department won the case. In Maryland, for example, the Maryland Court of Special Appeals upheld the Comptroller’s determination that an out-of-state pet food seller, Blue Buffalo Company, did not qualify for Public Law 86-272 protection because the seller’s collection of competitive information in Maryland by its employees was neither ancillary to solicitation of sales, nor de minimis. Instead, the collection of competitive information was “carried out on a regular basis as a continuing matter of company policy.”

In Oregon, the Oregon Tax Court upheld the Oregon Department of Revenue’s proposed increase in the real market value of optical fiber network operator Level 3 Communications’ centrally assessed property. Level 3 argued that the department should not have included in its “unit” certain “investment attributes” it claimed do not qualify as property. Ultimately, the court accepted the department’s revenue growth rates, which led to an increase in the value of Level 3’s property relative to the original assessed value.

In New York, the New York Division of Tax Appeals held that IBM must include royalties received from foreign affiliates in the computation of its taxable entire net income for its 2007 through 2012 tax years. Under prior law, New York had a royalty add-back regime requiring a taxpayer that paid royalties to a related party to add back the payments to the extent they were deductible in calculating federal taxable income, and the state also provided a “royalty income exclusion” that allowed royalty payees to exclude from income related entities’ royalty payments to the extent the payments were included in the payees’ federal taxable income. The Department argued that the royalty income exclusion did not apply if the royalty payments would not be required to be added back by the related payor under the add-back provisions. IBM contended that the royalty payments received from its foreign affiliates qualified for the royalty income exclusion because the foreign affiliates would be required to add back such payments if they were New York taxpayers. However, the Division of Tax Appeals said the payees must be New York taxpayers to qualify for the exclusion and, therefore, the royalty payments at issue could not be excluded.