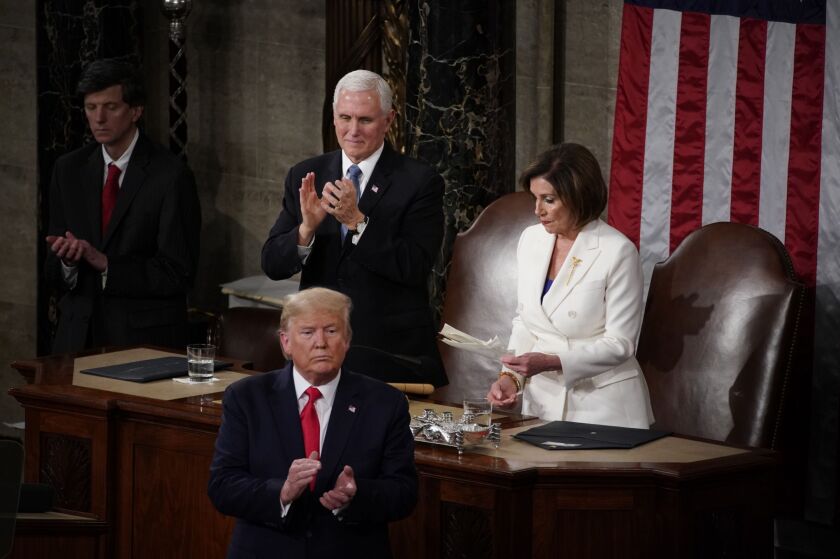 President Trump referred to the impact of the Tax Cuts and Jobs Act on job creation during his State of the Union address on Tuesday night.

Against the background of his impeachment trial in the Senate and a bitterly divided Congress, Trump used the occasion to promote the strong economy and make a case for re-electing him.

“From the instant I took office, I moved rapidly to revive the U.S. economy — slashing a record number of job-killing regulations, enacting historic and record-setting tax cuts, and fighting for fair and reciprocal trade agreements,” he said to applause from the Republican lawmakers in the audience, but few Democrats. “Our agenda is relentlessly pro-worker, pro-family, pro-growth, and, most of all, pro-American. We are advancing with unbridled optimism and lifting our citizens of every race, color, religion and creed very, very high.” Fact checkers have pointed out that Trump’s tax cuts were not the largest in U.S. history, at least for individual tax rates.

Trump highlighted the opportunity zones provision in the Tax Cuts and Jobs Act, which encourages investment in economically distressed communities, and he pointed to one of the beneficiaries of the tax break, who was in the audience.

“Jobs and investments are pouring into 9,000 previously neglected neighborhoods thanks to opportunity zones, a plan spearheaded by Senator Tim Scott as part of our great Republican tax cuts,” said Trump. “In other words, wealthy people and companies are pouring money into poor neighborhoods or areas that haven’t seen investment in many decades, creating jobs, energy, and excitement. This is the first time that these deserving communities have seen anything like this. It’s all working. Opportunity zones are helping Americans like Army veteran Tony Rankins from Cincinnati, Ohio. After struggling with drug addiction, Tony lost his job, his house and his family. He was homeless. But then Tony found a construction company that invests in opportunity zones. He is now a top tradesman, drug-free, reunited with his family, and he is here tonight. Tony, keep up the great work.”

The opportunity zone program has attracted criticism, however, for encouraging gentrification, with many of the tax breaks going to areas that were already attracting real estate investment.

Trump also pointed to the impact of the expanded Child Tax Credit in the Tax Cuts and Jobs Act. “Forty million American families have an average $2,200 extra thanks to our Child Tax Credit,” he said. “I’ve also overseen historic funding increases for high-quality child care, enabling 17 states to help more children, many of which have reduced or eliminated their waitlists altogether. And I sent Congress a plan with a vision to further expand access to high-quality child care, and urge you to act immediately.”

In the Democrats’ response to the State of the Union, Michigan Governor Gretchen Whitmer highlighted the work being done in her state and others by Democratic governors and questioned the veracity of Trump’s speech. “So when the president says the economy is strong, my question is, strong for whom? Strong for the wealthy who are reaping rewards from tax cuts they don’t need?” she said. “The American economy needs to be a different kind of strong. Strong for the science teacher spending her own money to buy supplies for her classroom. Strong for the single mom picking up extra hours so she can afford her daughter’s soccer cleats. Strong for the small business owner who has to make payroll at the end of the month.”

House Speaker Nancy Pelosi, D-Calif., gave her response in dramatic fashion at the end of Trump’s speech when she tore apart her copy of the document as he stood on the podium in front of her.