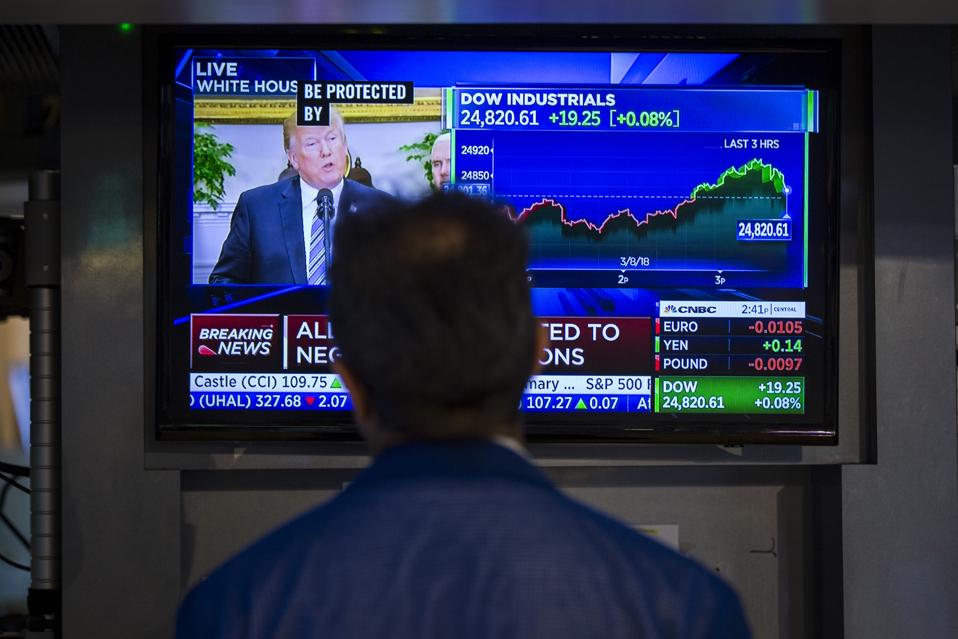 There are a lot of ideas packed into those 22 words and most of them are misleading. The S&P 500 is high, but not up 70%, 80% or 90% since Trump was sworn in. But more importantly, most people don’t have significant 401(k)s or IRAs, and almost no one has their retirement savings invested entirely in stocks. The last jab—“What are you doing wrong?”—implies the stock market world is the retirement account world and if you aren’t happy it’s your fault.

Isn’t Trump playing with fire by taking credit for the upside? People’s attitudes towards a pension system change rapidly when the stock market falls. The 2008 financial crisis had an enormous effect on people’s trust in the 401(k) system and 401(k) advisers.

What is Trump going to say when the stock market corrects? People 55 or older during the recession never quite recovered. They fell far behind in building up wealth again, and when they did find another job, it probably paid much less than they were earning before the recession. Rising 401(k) balances in the mid-2000s were small consolation.

Most People Don’t Have Meaningful 401(k)s or IRAs

When Trump talks about 401(k) balances, he is not talking to all Americans. Around half of American households approaching retirement have nothing saved in 401(k)s, as the Government Accountability Office has found.

Does Trump really want to bring people’s attention to how low their balances are? Attention to their retirement readiness is going to make them anxious about how they are going to live, get proper health care, and whether they can work. That worry is not going to help him get elected. We always need to tell people that when Trump or anyone talks about how great their 401(k)s are doing, we are talking about the relative elite—most people derive little if any retirement income outside of Social Security.

The Effects of Recessions on 401(k) Savings

Even for those lucky enough to have 401(k) savings, the last recession was devastating. As economists Sheldon Danzinger, Matt Rutledge and Alicia Munnell wrote, “participants took a direct hit. Individuals saw the value of equities in their 401(k) plans or IRAs decline by $2.8 trillion.” The amount older workers had in their 401(k)/IRA balances remained virtually unchanged between 2007 and 2010. Retirement savers grew three years older, but they grew no wealthier. They may have to work 4 more years to afford retirement.

I really worry about 401(k) participant behavior in a volatile market. People overspend, undersave and have much less than they would had they had a steady process of accumulation as in defined benefit plans such as traditional pensions, and, in a different way, Social Security.

Another way that the 401(k) system lets us down is through leakages. Economic shocks such as job loss, divorce and house purchase are associated with significant leakages from 401(k) accounts, particularly for lower income households.

One final bad side of 401(k)s: that they can hasten a recession. In the last run-up to the Great Recession in 2007, the overvalued stock market goaded consumers into what economists call a wealth effect, where the paper profits in a financial account encourages overspending. The mood is bright, but people don’t take into account the risk their paper wealth can also fall

Again, what is Trump going to say when people come to understand their financial futures are fragile? The only thing to conclude is that he hopes people can’t do personal finance math, don’t remember, think short term, and there is no stock market correction until election day in November.