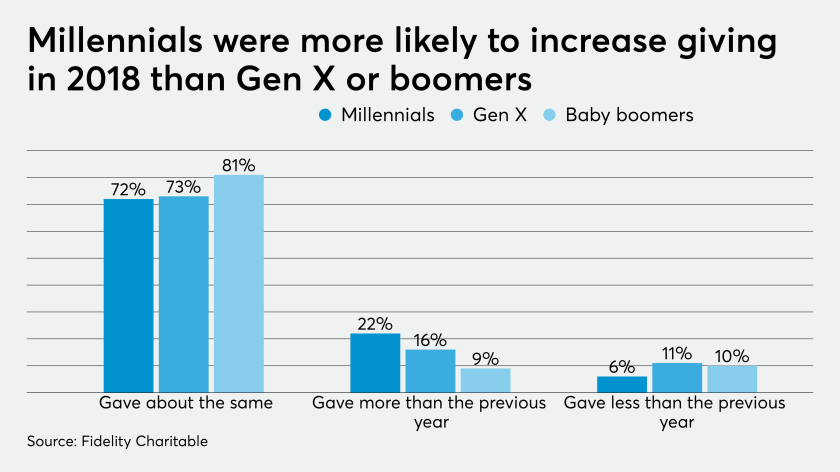 Approximately 50 percent of taxpayers made at least one change in their charitable giving strategy in response to the Tax Cuts and Jobs Act, according to a new survey.

The survey, by Fidelity Charitable, the brand name for the Fidelity Investments Charitable Gift Fund, polled 475 affluent and high-net worth charitable donors who itemized tax deductions in two of the last three years. It found that while the majority of taxpayers didn’t change the total dollar amount donated to charity after tax reform, 50 percent say they made an adjustment to their charitable giving strategy such as contributing to a donor-advised fund or donating appreciated securities to charity. For those who changed their total charitable giving dollars, tax reform was one of a variety of factors that influenced the decision. But for those who gave less to charity, tax reform was the most frequently cited reason.

The Tax Cuts and Jobs Act retained the charitable deduction, but made it less likely for middle-class and lower-income taxpayers to be able to claim it. The 2017 tax overhaul doubled the standard deduction while getting rid of personal and dependent exemptions, and eliminating or sharply limiting a host of traditional tax deductions, such as the state and local tax deduction. Overall, fewer taxpayers have enough itemized tax deductions to exceed the level of the new standard deduction, so fewer taxpayers receive a specific tax benefit for charitable giving.

But despite the changes that many taxpayers made in their approaches to charitable giving, about one-third of the respondents were surprised about their tax situation after filing their 2018 returns. More than half of that group found their situation was worse than they had anticipated. Older taxpayers were disproportionately surprised, with 40 percent of baby boomers saying they were surprised, compared to only 29 percent of millennials and 23 percent of Generation Xers.

Most of the respondents said they didn’t adjust the total dollar amount of their charitable giving in response to tax reform. Seventy-six percent of taxpayers donated about the same amount to charity in 2018 as they did the previous year, but 15 percent gave more.

Millennials were more likely to have increased their charitable giving in 2018 than Gen Xers and baby boomers, though that’s probably due to reasons other than tax reform, such as income growth or life stage. Taxpayers who work with a financial advisor were more likely to increase their giving.

“It is encouraging to see that those with the most to give plan to continue to give generously in the years to come,” said Tony Oommen, a charitable planning consultant at Fidelity Charitable, in a statement. “While recent reports show that individual giving as a whole may have been slightly reduced by recent tax reform, we are glad to see the commitment to giving staying strong. We’re also encouraged that many donors are making adjustments to help them continue to maximize their giving, such as contributing to donor-advised funds, which provide a mechanism for those with charitable intentions to commit funds for that purpose and continue their planful giving over time.”

Of those who gave more to charity last year, the biggest factor behind their increased giving was a request from a nonprofit, with 32 percent saying this motivated their desire to give more. Only 9 percent of taxpayers said they gave less in 2018 than the previous year, but the new tax law was the most influential factor in this decision, with 48 percent of those who gave less citing tax reform as the reason.

While most of the respondents said they kept their total dollar amount unchanged, 50 percent of the taxpayers polled reported making at least one change in their charitable giving strategy, such as contributing to a donor-advised fund, “bunching” several years’ of charitable gifts into a single year, or donating appreciated stock.

Three-quarters of taxpayers said they would give about the same amount to charity this year as last year, despite the significant group of taxpayers who were surprised by their tax situation in 2018.